I first read the classic George Orwell dystopian novel 1984 in 1968 when the date he used as the tittle of his book still seemed far in the future to a late teen that tended to concentrate on the slow moving present. The date must have seemed even further in the future to the people who read the book in 1949 when it was first published. I read Orwell’s book one slow summer in the heat of central Florida when no one we knew could afford air conditioning, especially us, and so I read the book outdoors sitting under the shade of an oak tree that was well over a century old which offered me the small comfort of some shade in the sweltering heat. I had time. I had plenty of time to read the book slowly and reflectively — and the book effected me profoundly. I was never to be the same again. 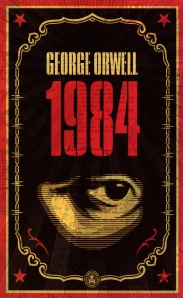 As the Wikipedia article on 1984 points out, many of the terms Orwell coined in his masterpiece such as Big Brother, doublethink, thoughtcrime, Newspeak, Room 101, and memory hole, all became part of our language over time. My favorite Orwellian phrase has always been down the memory hole. The job of the protagonist, Winston Smith, was to re-write past newspaper articles so that the historical record always was consistent with the ever changing Party line. The Party, of course, was the State. There was just one Party and it had an inner core of elites who were in the Inner Party and they controlled the masses via surveillance, mind control, constant propaganda, and brutal police state violence which is all justified due to the ever present war. The nation-state ruled by the tyrannical Party was always at war, had always been at war, and would forever be at war.

Winston Smith was a party member but he was not one of the Inner Party. Rather he was a member of the Outer Party just as most of our federal bureaucrats today are not part of the ruling elite of our own Empire. At one point he says to an Inner Party member, “I understand how, but I don’t understand why.”  He wanted to know why the Party did all those immoral and rotted things.

One of its leaders explains:

“The Party seeks power entirely for its own sake. We are not interested in the good of others; we are interested solely in power. We are different from all the oligarchies of the past in that we know what we are doing. All the others were cowards and hypocrites. They never had the courage to recognize their motives. We know that no one ever seizes power with the intention of relinquishing it. Power is not a means; it is an end. The object of persecution is persecution. The object of torture is torture. The object of power is power. How does one man assert his power over another? By making him suffer. Unless he is suffering, how can you be sure that he is obeying your will and not his own? Power is in inflicting pain and humiliation. Power is in tearing human minds to pieces and putting them together again in new shapes of your own choosing. In our world, there will be no emotions except fear, rage, triumph, and self-abasement – a world of fear and treachery and torment. If you want a picture of the future, imagine a boot stamping on a human face forever.” ~1984

Orwell captured the essential nature of the State perfectly in this speech by the party member to Winston Smith. Far too many people in the modern age have watched the American Empire start endless wars and grow ever more tyrannical without allowing themselves to ask the question: “why“?

In the book we find that the destruction of language makes it impossible to think independent thoughts because the meaning of words has become too confused while logic has been destroyed via doublethink. Orwell once observed in an essay on the English language that political language “is designed to make lies sound truthful and murder respectable, and to give an appearance of solidity to pure wind.” Our modern world has its own version of the thought police and our state has a propaganda machine that would have astounded George Orwell. While the present US Empire does not match the Orwellian dystopia exactly, there are many parallels between our reality and Orwell’s dystopian novel.

The latest NSA revelations due to the whistle blowing of Edward Snowden as published in the Guardian have told us that the US Empire fully expects to be able to read the minds of the masses just as The Party did in 1984. It is claimed that by computerized analysis of “meta-data” collected by the NSA that one can practically read the mind of the target individual. It is almost a cliché to say that the revelations of Edwards Snowden and others point to an Orwellian state being built.

But the massive spying by the NSA on the entire public is not the only bad news to come out over the last few years. We have the TSA terrorizing the flying public and making sounds like they want to be involved in searching people outside of airports. We have SWAT teams making routine no-knock raids on houses. And as various police state tactics escalate nationwide we learn, according to a report by KTTV, the Department of Homeland Security partnered with the Los Angeles County California Sheriff’s department and TSA agents to conduct an exercise that was described as a “full scale terrorism drill”. The drill was reported to have been taking place nationwide with various agencies even using agents “working undercover, looking like any other passenger, they scour faces, briefcases and backpacks, looking for anything out of the ordinary.” US Officials claimed that these drills were designed to make the public feel “safe” in light of the 4th of July holiday and rumors that the Boston Bombers had planed a July 4th terror attack. According to Nicole Nishida of the Los Angeles County Sheriff’s Department, the people will celebrate their independence from tyranny by submitting to random bag searches.

Winston Smith observed that your worst enemy was your nervous system because at any moment the tension inside you was liable to translate itself into some visible symptom. Today our own police state is working towards the capability to use real-time computer analysis to read thoughts, emotions, and intentions that they claim will keep us safe from “terrorists” but could very well ensnare any of us in a false charge . The state is keeping an ever tighter grip on the public and far from making them safer, the state is putting everyone at risk of being identified as an “enemy” of the state.

A few years ago, Wendy McElroy asked the question: does the US have police state powers now? Her answer:

Clearly it does. The American government exerts extreme control over society, down to dictating which foods you may eat. Its economic control borders on the absolute. It politicizes and presides over even the traditional bastion of privacy — the family. Camera and other surveillance of daily life has soared, with the Supreme Court recently expanding the “right” of police to perform warrantless searches. Enforcement is so draconian that the United States has more prisoners per capita than any other nation; and over the last few years, the police have been self-consciously militarizing their procedures and attitudes. Travel, formerly a right, is now a privilege granted by government agents at their whim. Several huge and tyrannical law-enforcement agencies monitor peaceful behavior rather than respond to crime. These agencies operate largely outside the restrictions of the Constitution; for example, the TSA conducts arbitrary searches in violation of Fourth Amendment guarantees.

The methods that the ruling elite use to control the mases have been documented in many, many places. I ran a Google search today on “US police state” (without the quotes) and Google yielded just shy of one Billion hits. The question is not “is the USA becoming a police state” but rather the question is “why”. Why does the state continue to grab power and why do we allow it to do so? Just as Winston Smith pointed out, we can easily see how the total control by the state is coming to be, but we need to know why. It is not, my friends, to keep you safe. Your safety is the last thing on the minds of the rulers.

George Orwell answered the “why” in ’49 and the answer has not changed. It is about power. Solely about power. It is the nature of humans to want power over others, and we have known for thousands of years that power corrupts and with ever more power comes ever more corruption. There is no reason to expect that we can hand power over to those running the State without them seeking ever more power until the dystopian nightmare comes to us.

If you do not see the state as our enemy as did Albert Jay Nock, then you have not been paying attention.

Note: an edited version of this essay first appeared a week ago here.

Update: In the editing process the number one billion got changed to one trillion somehow and has now been fixed due to the kind response on this matter in other media.