On Twitter, there is little way to have any sort of real debate since with 140 characters maximum one can not do much else other than hurl talking points. A few have had great differences over what an anarchist or libertarian should do this election cycle. In this essay I am going to give my thoughts on the situation.

I have agreed with Butler Shaffer for decades, especially this essay, “Why I Do Not Vote”, where he points out that politics is just plain evil. That is a great essay and I encourage you to read it. In the end, Professor Shaffer makes the case that we should not vote for short term gain by voting for someone closer to our libertarian outlook. He thinks we should weaken the state by not participating and looking hopefully toward the future in the knowledge that the nation-state will fall someday.

Unfortunately Butler Shaffer’s viewpoint takes time. What if we don’t have much time left? What if this election cycle may determine if we live or die? By the non-aggression principle I may fight back against the nation-state by voting since I have been ruled by politics for over six decades and the political system aggressed against me first. So, don’t holler at me that anarchists or libertarians are not allowed to vote and remain “pure”. I can if I want to — especially if I feel I need to. Especially is nuclear war hangs in the balance.

First things first. If I choose to vote due to the importance of this election, I will do so for the first time since Reagan’s first term. And, if I so chose, I’ll only vote for the top of the ticket since that is what has me so concerned about this cycle.

If I lived in a “safe state”, then I would not vote. There are many states in the US that are going to go heavily Democratic or heavily Republican and one need not get involved in these “safe states”. These are safe places to vote third party and many libertarians do so in those states — and crow about it without mentioning that they don’t live in a battle-ground state. But I live in Florida.

I did not vote in the election where Gore lost to Bush on a recount of votes; nor have I voted here since then other than for Ron Paul in the primary. (that got me called for jury duty) But I watched and realized that Florida is a 50-50 state that can go either way in a presidential election. Florida is one of the “battle ground” states and hence you vote may well be damned important in Florida.

The election will be won by the Republican or by the Democrat. Only the naive or the deluded would say otherwise. That means you will have either Hillary Clinton or Donald Trump elected as president next November. (inauguration in January) It is also true that Florida will play a huge part in deciding which one of those two will be elected president. And so, I will hold my nose and vote unless one party or the other is so far ahead as to make my effort worthless. (I’ll not go by rigged polls though)

So, who to vote for? Not third party as that does nothing but waste my time and encourage the nation-state for no purpose. I will vote Trump to stop the evil, corrupt, war-mongering, murdering Clinton. I have watched both Clintons for decades and have never seen such an evil pair. Many other agree. See here or here or here or here for just a few others that I read today expressing the same concerns.

Many don’t know that the US military has been working on small nuclear devices called “battle field nukes” or tactical nukes. The devices are so small now that Generals have said that using nukes in a war is now “thinkable”. Not to me of course, but to the General with a mind only on war — perhaps nuclear war has become thinkable.

The Empire is pushing Russia hard and we have NATO troops on the very border of Russia while we are confronting China in an area called ‘The China Sea’. Why? Do we expect to do a “regime change” in these nuclear supper powers?

The most reliable warmonger and aggressive person in the presidential race is Hillary Clinton. She has demonstrated for decades that she wants the Empire to attack and destroy countries around the world. She will attack in the Middle East and ultimately she will attack Russia,

Can an exchange of tactical nuclear weapons be kept limited? No, of course not. We almost destroyed the world via all out nuclear war on two different occasions during the cold war.

The editorial director of Antiwar.com wrote:

Take Greg Sargent, an opinion columnist with the Washington Post, who was a twinkle in his parents’ eyes when John F. Kennedy put American nukes in Turkey and the Russians responded by installing nuclear missiles in Cuba. So eager is he for a confrontation with Vladimir Putin that he tweeted this the other day. I responded with this. And he fired back with this – I must be a Trump supporter! As I told him, I hope he’s alive after the next missile crisis with Russia – which will be coming real soon after Hillary Clinton takes office.

From those on the far left to those on the far right, we see people tell us that the election of Clinton could well lead to war with Russia and that would be world war. Mankind will not survive the next world war. I realize the low information voter and especially the millennials can’t see that, but there is no fix for stupid. People who have watched Hillary Clinton for decades are very concerned that she might become president. Very concerned.

I will vote Trump to stop Clinton. 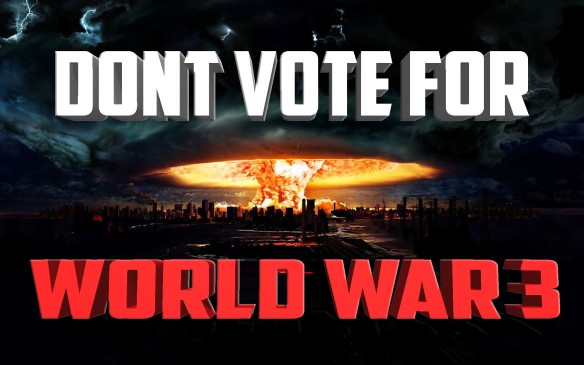