On occasion I have referred to the US Empire as a police state and have received complaints that we are nowhere near a police state. This morning I was reading an article by the always wonderful Fred Reed when I read the following paragraphs.

NSA spies on us illegally and in detail, recording telephone conversations, reading email, recording our financial transactions, on and on. TSA makes air travel a nightmare, forcing us to hop about barefoot and confiscating toothpaste. The police kick in our doors at night on no-knock raids and shoot our dogs. In bus stations we are subject to search without probable cause. The feds track us through our cell phones. Laws make it a crime to photograph the police, an out-and-out totalitarian step: Cockroaches do not like light. The feds give police forces across the country weaponry normal to militaries. Whatever the intention, it is the hardware of control of dissent. Think Tian An Men Square in China.

And we have no recourse. If you resist, you go to jail, maybe not for long, not yet anyway, but jail is jail. Object to TSA and you miss your flight. They know it and use it. The courts do nothing about this. They too are feds.~ Fred Reed

There is much, much more to the story of course, but those two paragraphs (tip of the iceberg that they are) tell us that the Empire is now a police state and that it is getting more totalitarian by the day. It was just this past week that my wife was complaining that some mother got arrested and put in jail because she had a spoon in her purse. Mothers have all sorts of things in their purse and a spoon is one of the things that could easily be in any mother’s purse. (especially if her young are still toddlers) Arrested for what? For having “drug paraphernalia” of course. The most horrible thing is that her public defender wanted to plea bargain her straight to jail. What a wonderful system, eh? 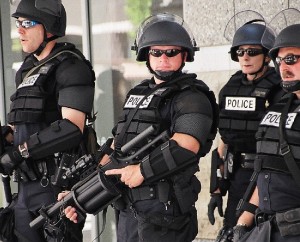 We have SWAT teams everywhere and they are raiding people’s homes as if they were in a war zone in WWII. I read that SWAT teams are even serving court papers via military style reads these days. This fact alone should tell you that we live in a police state that is growing in power and arrogance all the time.

And yet, I read “conservatives” who claim that we need to vote in Republicans next election cycle to “put things right”. What in the hell are those people drinking? The Republicans are every bit as guilty as the Democrats of setting up the control freak nanny state. The “war” between the two parties is every bit as real as the “war” between two professional wrestlers on TV. It is all for show my friends, all for show. And all to get you distracted from the fact that the US Empire is totally out of control.

I read “progressives” who claim that all is well except for the Empire’s foreign policy. May the gods have mercy on progressives — they are so stupid that they can’t see that they have been supporting “humanitarian” military interventions since the early 1900s. The progressives want to see a totally powerful central state so that the central government can make everyone do just as they think people should act. The Republicans want the same — except people should be forced to act as Republicans think they should rather than what Democrats want. Both sides want to “run the world”.

We are caught between two sets of idiots. May the gods have pity on us.

Another example of the building tyranny is that there is always unwarranted secrecy by the central state. There are still sealed and secrete papers concerning the assassination of John Kennedy for god’s sake. What is up with that? Kennedy died in 1963! And I read that ever since the Boston Marathon bombing, the FBI has been intimidating, harassing, and silencing friends and acquaintances of the Tsarnaev brothers. Dzhokhar Tsarnaev’s lawyers are having trouble getting anyone to talk to them according to recent court documents. It seems that no big national “terror” event is ever handled with the transparency that one would expect of a free country — it is always handled as if the state itself was in on the event. (and maybe they are in some of them)

Cops are stopping people in their cars and robbing them if the people have any cash — to the point that the Canadian government recently warned its citizens not to carry cash if they visited the US. Cops are killing “suspects” in the street on a regular basis but they have immunity. They are trained in military tactics and they make full use of their training.

If you have any delusions that we live in a free country rather than a police state, then you have not been reading the news at alternative news sites across the net. Turn off you TV and stop reading your mainstream newspaper. Turn off the propaganda and take a look at what is going on in this country right now.

The state is your enemy.

4 thoughts on “The building tyranny”