Current issues have got libertarian/anarchists totally confused. No govt = no rules, no borders, welcome to invaders, right? No.

And he was right that there has been some confusion. First, let us get out of the way that everyone who claims to be an anarchist is not necessarily an anarchist. Some would re-name the State and call it a syndicate or whatever and you would still have monopoly control by a different name. Some just use the name “libertarian” or “anarchist” to seem “cool” or gain authority. So, let us not worry about what “everyone” says and get on to the heart of the matter.

The anarcho-capitalist has to look at the world as it is now, as it would be in transition from here to anarchy, and at the world in that final state of anarchy after the state has been dispatched. Some want to take the words of Rothbard or others when they were plainly describing how a world without a state might be run and apply that to the current political situation in the USA. I don’t know it you have noticed, but there is a state in the US and it is damn powerful, intrusive, tyrannical, and out of control.

First, let us look at a world in which the state has been defeated and anarchy has replaced it. We would see an AnCap system of law, property rights, and voluntary mutual cooperation. All property would be owned by someone (or some group) and it would not be possible to legally go on to someone’s land without permission. Even privately own roads, the only kind in such a world, would be used only by the invitation of the owner. (the “owner” could be a group or business of course)

Without a state there would be no welfare or other reason to migrate other than personal preference or trying to escape some land where a state still existed. As heartless as it sounds, the migrant would need invitation from the owners to immigrate another land.

The above is overly simplistic perhaps, and there have been books written on this issue among others. But I see no reason to belabor the anarchists world in this short post since we do have a nation-state situation and not a stateless situation. The USA is the world’s most dominate and aggressive empire the world has ever seen.

So now what? What say you anarchists?

The property rights of everyone in the nation, and especially on the border, should be protected. I understand that property owners on the southern border of the US are living in a virtual hell as criminal pour over the border. If you are going to take their taxes and make them abide by your laws then protect them.

The “government owned property” like roads or parks are the jointly owned property of all legal residents. As such, the people have a right to see the laws enforced and intruders kept out.

But what about immigration?

If the nation-state is going to bribe voters with welfare and other goodies (stolen from producers) then people will pour over the borders in uncontrolled fashion. They will come illegally and be criminals the instant they step foot on US soil; and being a criminal in one area often makes one more likely to break other laws.

What to do? It is obvious that the nation-state has to control the flow of people to protect the society itself. So, close the border and stop the destruction of society. Then decide how many people you want to let in the country and have a workable method for these people to be documented and have citizenship. Let them come here legally.

Just as Ron Paul plainly pointed out in 2012, there has to be border security if there is going to be a nation-state. Personally, I would rather see anarchy but that is not going to happen anytime soon, so we need to stop the madness of illegal immigration. 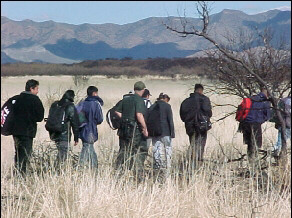 4 thoughts on “Anarchists and borders”