Once upon a time from the 1600s to the 1800s there were liberals that we now have to call “classical liberals” since the modern liberals are the exact opposite of the old-time liberals. The modern fraudsters claim the label liberal even though they don’t deserve it at all. They should give the label back to real liberals.

“I’m interested in only one thing: progressive reductions of the role of all government power in people’s lives all the way to zero if possible. Whatever brings that about, in whatever sector it happens, and whether it happens slowly by steps or all in one fell swoop, I’m for it. I really don’t care who or what makes a contribution to this end or how it comes about, so long as it is ethical and it actually achieves the aim of human liberation, the mother of all progress, order, and higher civilization.”

Jeffery Tucker’s statement leaves a lot of room for people of differing opinions to work together under the banner of libertarianism. I am a radical libertarian myself and would rather see the state tossed into the trash-bin of history all at once and soon, but I know there are those who believe we must extradite ourselves from this state-caused nightmare of evil governments slowly to overcome the damage they have done. We differ on tactics but not on the goal.

Murray Rothbard thought that we could be allies with the small-government conservatives or minarchists. Yes, we can find common cause with them at times, but they are as much the enemy as the evil, government-worshiping progressives. They are statists and their philosophy leads right back to the police state given enough time no matter how small a state they start with. After all, the early U.S. republic was the ultimate minarchist dream but started a drift towards ever more power flowing to the central state almost immediately.

Rothbard warned against any drifting to the right-wing and conservatism by libertarians. He wrote in his classic “Left and Right: The Prospects for Liberty” an essay that challenged the fallacy that libertarianism was a conservative doctrine and warned against rightward deviations.

Libertarians of the present day are accustomed to think of socialism as the polar opposite of the libertarian creed. But this is a grave mistake, responsible for a severe ideological disorientation of libertarians in the present world. As we have seen, Conservatism was the polar opposite of liberty; and socialism, while to the “left” of conservatism, was essentially a confused, middle-of-the road movement. It was, and still is, middle-of-the road because it tries to achieve Liberal ends by the use of Conservative means. ~Murray Rothbard (1965)

Rothbard’s “conservative means” here refers to the political devices and institutions of government such as taxation, the police, prisons, federal departments, and all the rest. He pointed out that for most of human history government has been a conservative institution and always on the side of economic privilege, theocracy, patriarchy, and militarism. As Rothbard described it:

Socialism, like Liberalism and against Conservatism, accepted the industrial system and the liberal goals of freedom, reason, mobility, progress, higher living standards for the masses, and an end to theocracy and war; but it tried to achieve these ends by the use of incompatible, Conservative means: statism, central planning, communitarianism, etc. Or rather, to be more precise, there were from the beginning two different strands within Socialism: one was the Right-wing, authoritarian strand, from Saint-Simon down, which glorified statism, hierarchy, and collectivism and which was thus a projection of Conservatism trying to accept and dominate the new industrial civilization. The other was the Left-wing, relatively libertarian strand, exemplified in their different ways by Marx and Bakunin, revolutionary and far more interested in achieving the libertarian goals of liberalism and socialism: but especially the smashing of the State apparatus to achieve the “withering away of the State” and the “end of the exploitation of man by man.”

Modern American left-liberals always favor state-socialist means which libertarians see as immoral as well as destructive of society. Even so, they often have goals that line up with libertarians especially when they are defending the common man against powerful forces. But it would be a mistake to think that the modern left is any better than the modern conservatives. Libertarians have to reject both of these ideologies as they are not in favor of liberty for all men. We will reject both conservatism and modern “liberalism” (or progressivism) as not being “libertarian” or even anything close. Among those that we can realistically call libertarian there are various distinctions: we have “left-libertarians”, “right-libertarians”, minarch libertarians, radical libertarians, and on and on. One might say there is a spectrum of beliefs held by those we might be realistically called libertarian.

I believe that the key distinction among varying kinds of libertarians should be seen as one of principle and not one of aesthetics or slogans. There are libertarians who champion freedom of association, decentralizing power, maximum individual liberty, private property rights, voluntary exchange, laissez-faire markets, and peace. They champion the non-aggression principle. These are libertarians and not those so-called “libertarians” who just want to make the government work more efficiently and who compromise on property rights and free association and favor government war.

The real issue is whether a person sees the state as a moral hazard and the enemy, or just another institution to be used to achieve a political goal. The pro-state “libertarians” might have laudable goals in mind such as some nebulous concept of freedom and justice, but if you want to use the state to achieve your goals you are not a libertarian. I think the term libertarian means that one will oppose the initiation of violence, force, or fraud against the innocent by anyone, especially by the minions of the state. This is the non-aggression principle, and it is the unifying and underlining philosophical basis for libertarianism. I don’t see how one can be called a “libertarian” without his agreeing to the non-aggression principle. 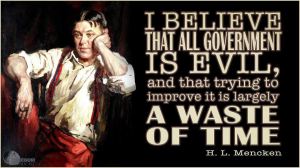 2 thoughts on “The Libertarian Brand”