There are only two ways in which a society can govern itself. One way is by force while the second way is by voluntary cooperation. These two methods of societal governance are mutually exclusive. Just as you can not have a “voluntary tax”, you can not have mutual and voluntary cooperation with a gun aimed at your head. The state is that entity that uses guns and other brutal means to coerce your actions. And that brings us to politics.

We are headed into another election cycle and there is already talk of what candidates the two parties will select to run against each other in the 2016 election for president. I see some people I follow on Twitter claiming that the Republicans need to “win” so that we can “save” the country. Utter horse manure.

There is no amount of electioneering or correct voting going to save us. It does not matter if Mrs. Clinton wins or loses other than we would have to listen to that lying old crone whine about things from “the bully pulpit”. No one can save the U.S. from its bankruptcy. No candidate can save the U.S. from the brutality of the militarized police, the murders by SWAT team home invaders,  or the invasion of privacy by the NSA and other agencies. Politics and voting will not save you from the horrors you see around you and read about at your favorite web sites. It was the voting booth that got us were we are at now!

Do I mean there is no politician that will try to save us? Yes, that is what I am saying. In spite of the fact that some candidates may be marginally better than other candidates, there are none that will save you. The politician must finance his campaign, and that means he will promise to steal (taxes for example) from one set of citizens to give to others. We are talking plunder here. Politics is about plundering those that produce in the market to fund those who want to live by the power of force and coercion.

What about those politicians that tell us what we want to hear?  The politician will make promises to the voter that he knows he will never keep. The politician lies to the voter all the time. Remember that Ronald Reagan continually talked about “getting government off your back” as he increased the size of government year after year. Lies? Am I accusing the political class of telling lies? The most successful politicians are not hindered by having moral principles. They have no qualms about telling the voters they will protect them and their property as they plan the confiscation of their property in order fund their agenda and to pay off their cronies.

Will any politician enact a decent foreign policy and try to bring peace to this war weary planet? Surely you jest. Our children are taught and indoctrinated to respect and give allegiance to a state that bullies, tortures, and murders people around the world. Our foreign policy is that of a brutal, amoral empire that murders innocent men, women, and children every day. The empire also performs similar acts of violence and coercion against its own people. We call that “law enforcement” and we are propagandized from birth to the grave to “respect” the militarized police.

Do you really think that your vote for president in 2016 will change anything? Do you think Rand Paul will cure it all perhaps? The best you can hope for is that a strong, moral, libertarian-leaning candidate might slow the progress towards totalitarianism to some small degree. Do you want to violate the non-aggression principle by voting just to make the progress toward dystopia take an extra few years?

Voting is not the answer. Voting for our rulers got us into this mess in the first place. It is time to stop participating in the State’s ceremonies.

“To replace one set of power-seekers with another affects the distribution of the political loot. It does not stop the looting.” ~ Gary North

As we come into the 2016 election cycle, you may favor one candidate over the next. You may think that one bastard is less evil than the other bastard. But it is still true that the lesser of two evils is still evil. Don’t expect the political process to somehow, by magic, produce good. 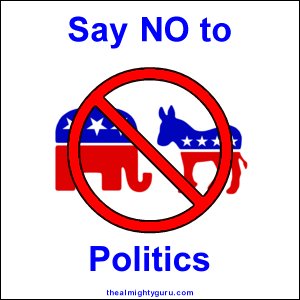